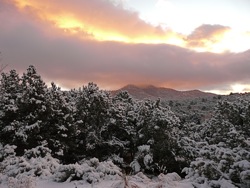 On this very snowy Santa Fe morning and with one week left until the 2008 Winter Solstice, I’m pleased to release this new song for free under a creative commons license. Snow Break is a 92bpm ‘breaks’ piece based around a sampled string melody from a 1960’s Mellotron tape loop. (The Mellotron was the original pre-digital sampler, a massive and fiddly organ that triggered the playback of tape loops instead of tone wheels…)

It’s been years since I’ve played around in the 90-bpm breaks range. Having that extra time/space between the beats makes it possible to play with wicked bass sounds and long cymbals – things that are hard to squeeze into my usual 140-175bpm range. This is also the first song I’ve mastered using Logic’s built-in multiband compressor and adaptive limiter (instead of an off-the-shelf mastering tool like Yamaha’s finalizer or T-racks.) I think the Logic plugins preserved a lot of the crispness and space that would have been muddied up by the other harder-edged mastering tools. This is the final (13th) mix of this song.

As heard in a fire arts performance

Original compositions may be downloaded for free at full 320kbps MP3 quality.

Creative Commons CC-BY 2.0
Most (but not all) of my tracks can be used in films, podcasts, games, etc. with attribution.